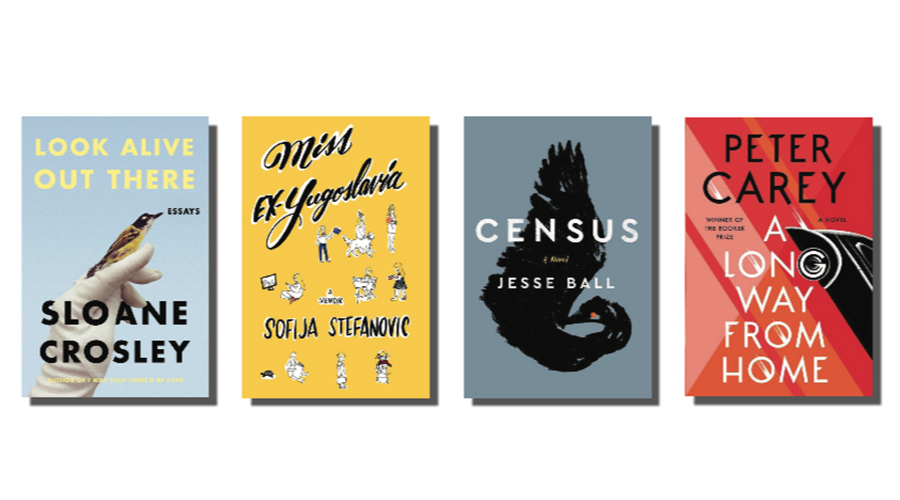 What is winter for if not hiding under the covers with a good page-turner? Here we divulge a few of our favourite new reads, available from a good bookstore near you.

Look Alive Out There by Sloane Crosley
Providing ample inspiration in the form of a life well lived, the third edition in Crosley’s collection of personal essays is making waves on the literary scene for its smart balance of laugh-out-loud scenarios and introspective reprieves. Whether searching for her legendary pornstar of the 70s ‘uncle’ or grappling with a man holding her internet domain name hostage, the writer’s wit is abounding. Our favourite dissertation? That would have to be the one that explores her psychic connection to Tracy Emin’s artwork ‘Everyone I Have Ever Slept With’, which, like so many others, leaves you ruminating long after reading.

Miss Ex-Yugoslavia by Sofija Stefanovic
The immigrant experience is excellently articulated in this memoir by the Serbian author. From her awkward birth, through to the unabating feeling of being an adult fish out of water in her adoptive home of Australia, Stefanovic’s life has always been awkward. Especially the bit about her taking part in a beauty contest between immigrants and refugees from different sides of a conflict for her film class. The contrast between the unruly streets of Belgrade, to the ‘fair dinkum’ backyard of Whyalla, South Australia, makes for a story that is as wacky as it is profound.

Census by Jesse Ball
Another account driven by personal circumstance, the heartfelt nature with which Ball tells the story of his relationship with his father and the life of his brother, who had Down’s Syndrome and dies at age 24, is almost harrowing in its humanism. Not just an anecdote, Ball transforms his experience into a modern-day fable. When the father receives news that he hasn’t long to live, he decides to become a census taker — an occupation that sees them traversing the country together on a bonding Odyssey. There are a few apocalyptic points of fiction in an otherwise entirely realist novel, but the theme that belies Census is that of enduring, familial love.

A Long Way From Home by Peter Carey
Touted as the double Booker Prize-winner’s ‘best book in decades’, herein Carey delves into what it means to be a white Australian by way of the remote counties that are the landscape of his childhood. The story is partially told from the vantage point of a light-skinned Aboriginal who has been brought up to associate as a white person, while a parallel narrative comes from a fair-haired son of a Protestant preacher. The latter embarks on a 16,000-km, 17-day car race around the country which brings to light the horrific treatment of Australia’s indigenous people.