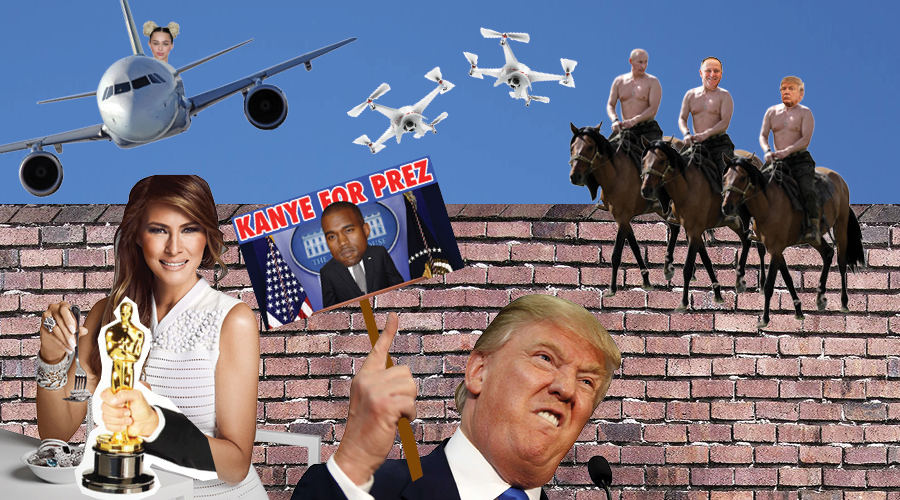 This article has been taken from our Spring Issue of Denizen.

The year is 2019 and the unrequited Trump of America approaches the end of his first term. Like Ronald Raegan brought an end to the Cold War, Trump has brought an end to America’s War on Terrorism, focusing now on a ‘Wall on Mexico’. Having been ousted from NATO for a metaphorical shirtless horseback ride with Putin, Trump has grounded (docked) all military outfits stateside to oversee The Great Wall of Illegal Immigration.

At a metre high, the wall is largely metaphorical, albeit policed by reappropriated drones. Mexico paid for lunch, once. Formerly the third biggest trading partner with the U.S they are now ironically the largest, the U.K. — the Loner of Europe — is the second, and for all its eye rolling Canada can’t keep away. Currently the peso has equal standing to the once mighty Greenback and illegal immigration across the border to Mexico has been rising steadily since the turbulent “ban the Muslims” first year in office. Muslims aren’t banned as of April 2018, but they do have to carry a GPS chipped license on them — an initiative broadly criticised for the benefit of 10% off Trump Hotel and Resort bookings for all card holders — pundits say it should have been 20.

Meanwhile Melania Trump has a Best Original Screen Play Oscar nomination for boy wizard epic Make America Magic Again, it resembles Harry Potter only by accident having been made up of common words in common sentences. The FLOTUS with the “Hocus- Pocus” also released a line of (made in America) coat dresses featured in the film that sell-out continuously. Most recently FLOTUS-hopeful Kim Kardashian-West made a public appearance, and unmistakeable statement, wearing one; throwing it into the crowd, at a campaign debate for husband Kanye’s 2020 Democratic Nomination bid. Before he could finish, Taylor Swift took the microphone and declared Bernie Sanders the greatest Democratic Candidate of all time, all time.

Across the Pacific, Prime Minister of New Zealand Ruth Bader Ginsburg has self-published her autobiography to clear up any questions over her nationality and alignment to the United States as former associate Justice of the Supreme Court. Now our nation can read for themselves how Bader Ginsburg legally gained citizenship in less than three months under advanced Trexit legislation for academics and her love affair with the nation before the passing of her late husband. Meanwhile, Trump has nominated John Key as associate Justice of the Supreme Court Stateside, it has nothing to do with their metaphorical shirtless horseback ride.

Since abandoning the USA on moral grounds, the global film industry is looking to Wellywood as its new base under Mayor Peter Jackson. Across the ditch, Australia hasn’t had a Prime Minister for more than five minutes since 2016 and the Mad Max empire jumped ship to Rangipo last November. The septology comes to an end next Easter. Leading lady Charlize Theron said it was the right decision until Australia put an end to its leadership woes and finally joined the Zen; becoming part of the Trans Pacifika (and Japan) Partnership Agreement, annihilating the laws and archaic ideas that have allowed the ‘Pacific solution’ and ‘operation sovereign borders’ to go on for a decade too many.

By the way, Rawdon Christie is back hosting Breakfast.