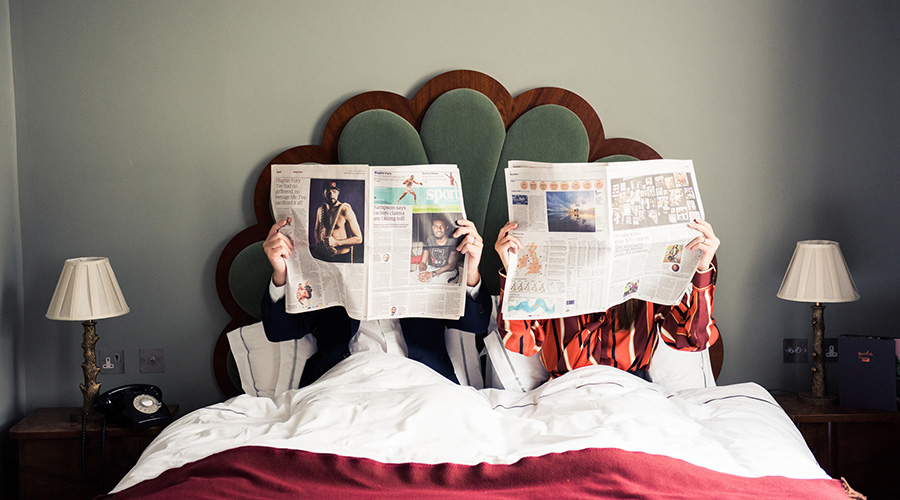 As I recently marked my third anniversary of living in the US, it seemed a good time to reflect on a few things I’ve learned since moving stateside: 1. New Zealand is sorely lacking in late night food delivery options. 2. Americans really know how to sell themselves. 3. You can often learn more about a person by their news outlet of choice than you can by their Tinder profile.

News (the fake kind and the real kind), and the people who make it, have become the story. Not only are our opinions shaped by what we read and watch, but those choices have begun to define the ways we interact with each other. And our consumption of news is radically changing. No longer bound by publishing deadlines and evening news bulletins, we receive news at our fingertips (literally) every minute of the day. And that’s important, because how we consume increasingly affects what we consume.

More than two-thirds of Americans report getting at least some of their news from social media, according to a survey by the Pew Research Center. And, though still very much a young person’s paradise, more than half of Americans aged 50 or older also reported getting their news from social media. Platforms like Facebook and Twitter are founded on principles of interaction and engagement. They are built, literally, by the people who use them. And so our interaction with news moves from passive consumption to a dialogue — a conversation around the events as they happen.

So we begin to treat our news to the network effect. Much like how our egos inflate with each ‘like’ on our carefully crafted Instagram snap, it could be contended that the perceived credibility of an article increases in tandem with shares and likes. Given that our online friends are more inclined to share our worldview, this could skew the type of news we are likely to view as credible. And as Internet activist and CEO of Upworthy, Eli Pariser, warned in 2011: increasing personalisation of algorithms known as a ‘filter bubble’ means that we are less likely to even see opposing viewpoints. Put simply, we are living in echo chambers of our own making, where we are more prone to hearing our own arguments yelled back at us than we are to enter into meaningful debate. At the end of the day, it’s easier to wrestle with a viewpoint that you naturally agree with. But is it possible that the Internet, originally touted as the great democratiser, might actually be contributing to higher polarity?

The growing number of news media (across all platforms) in the years since the creation of the Internet has encouraged more partisan outlets, according to renowned media reporter Paul Farhi. This can be attributed to low barriers to entry as well as the mushrooming blogosphere. Farhi aptly noted in The Washington Post, “your chance of running into ‘news’ that seems biased has increased exponentially, elevating the impression that ‘bias’ is pervasive throughout all parts of the media.” But while social media itself might not be increasing polarisation, what we have to look at is the nature of the news giants using it to promote their material.

In Pew Research Center’s largest study of U.S. political attitudes in 2014, Republicans and Democrats were found to be more ideologically divided than at any point in the last 20 years. The study also found that “the most politically polarised are more actively involved in politics, amplifying the voices that are the least willing to see the parties meet each other halfway.” Conclusion being that strong extremes combined with a centre that’s less likely to participate equals a more divided voting public.

This is not a US-specific phenomenon, though the increasingly partisan nature of American politics can sometimes make it seem that way. Just as the success of Obama’s 2008 ‘Yes We Can’ campaign was defined by a previously unseen mobilisation of social media to reach voters, Jacinda Ardern — with her keen grasp of social media and selfies — enjoyed a similar buoying of support in the 2017 general election.

While traditional media outlets like the New Zealand Herald continue to dominate readership, 2017 saw the increased popularity of digital news outlets like The Spinoff and Newsroom. The latter, according to AUT’s New Zealand Media Ownership 2017 report, broke multiple news stories in the public interest which were not covered in the major outlets. So while the big wigs still rule the roost, New Zealand certainly has some impressive, new digital newcomers to watch.

The Internet is, however, an ever-changing beast and the news we read online can sometimes suffer because of it. With increasing access to a plethora of outlets and a news cycle that would make even the most avid news junkie reach for a stiff drink, we have to wrestle with the buzzword(s) of the past year: fake news.

It’s a real phenomenon, and a dangerous one. Fake news has been co-opted (especially by the far right) to encourage a distrust of the mainstream media. A recent study by a group of Oxford University researchers found that, on Facebook, extreme hard right pages “circulate more junk news than all the other audiences put together.”

In 2016, a Gallup poll dropped to its lowest level in polling history, with only “32% of Americans saying they have a great deal or fair amount of trust in the media”. Fake news adds another layer of consideration to media consumption and requires the reader to be sceptical of what they’re reading, which doesn’t engender a whole lot of trust between audience and outlet. Fake news is essentially that ex-boyfriend responsible for your trust issues.

While what has happened in the US — especially in the lead up to the 2016 presidential election — may feel like a world away, New Zealand is not immune to such manipulation and we can definitely learn from it. Technology has made it easier for us to consume news — easier for us to hear what we want to hear. But it has also made it a lot more difficult for us to really listen to each other.

The onus isn’t just on the audience. It goes both ways. As Mary Walter suggested in NiemanLab’s ‘Predictions for Journalism 2018’, this year might allow for a little vulnerability. “What if in 2018, instead of trying to sell our audiences something they may not want […] we simply admit we need their trust, understanding, and investment to provide great journalism?”

She’s right. Journalism, if it is to function properly, relies on trust. It relies on a buy-in from us — the seeing, reading, watching, scrolling public. What we really need in today’s crazy news climate is a little empathy — from journalists and from readers. That’s not always easy, certainly not with our #WeCanReallyHaveItAll lifestyles. Smart news consumption today requires an investment of time, which is sometimes the hardest thing to come by.

My advice? Be your own best advocate. Reach across that metaphorical aisle. Don’t just depend on Facebook. Endeavour to read articles you don’t agree with. Follow (credible) writers whose opinions may at first seem incomprehensible. And don’t just read them; try to understand where they’re coming from. I’m not saying we’ll see a utopian political consensus, but I’d settle for making a little headway.