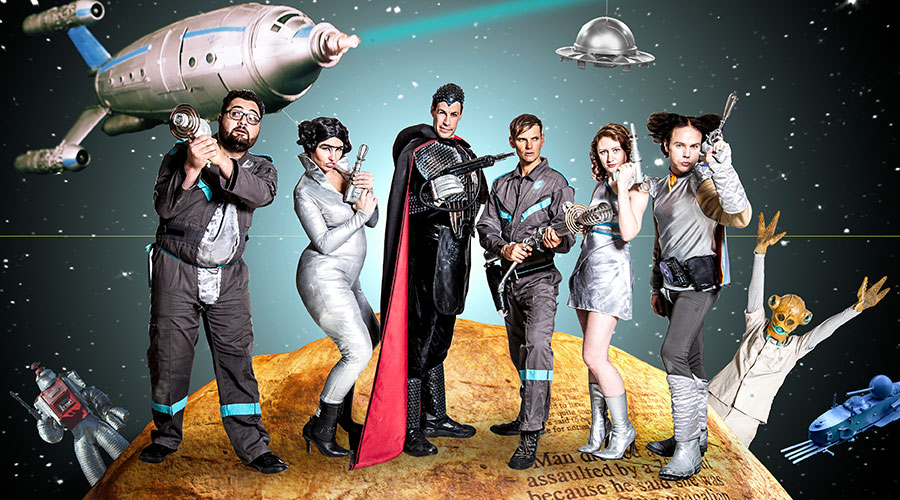 Once upon a time not so long ago, in a galaxy far far away...

For anyone who’s ever considered using ‘the force’…This Giant Papier Mache Boulder Is Actually Really Heavy is for you. Winning accolades such as Best Independent Film at the UK Starburst Film Festival and dubbed as “the biggest surprise at this year’s Boston Sci-Festival” — not a remark to be taken lightly as we all know sci-fi fans are rarely dumbfounded by anything — this epic sci-fi action comedy might just be the funniest thing you’ll witness this year.

Close your eyes for a moment and imagine that you and two of your friends have somehow landed yourselves in the low-budget realm of a B-grade 1960s space flick. It doesn’t take long for you to deduce that there’s more to the peculiar universe than meets the eye. The latex monsters and evil space villains are the least of your worries. But unless you and your buddies want to be lost in space forever, you’re going to have to fight tooth and nail if you ever want to see home again. Let the absurd hilarity of this ominous occurrence ensue.

It doesn’t take a rocket scientist to see that debut filmmaker Christian Nicolson and co-writer Andrew Beszant drew from their childhood fixation with the genre. Taking inspiration from classic space odysseys like  Blake’s 7, Lost in Space, Dr Who and Star Trek, Boulder (as it is affectionately shortened for ease) is infused with the signature look and feel of these cult sci-fi flicks to aid it in embarking on its journey to becoming an icon in its own right. In fact, as the runner-up in the inaugural ‘Makemymovie’ competition, without a blockbuster budget, the production team exercised their ingenuity while Nicolson — who, when he isn’t writing, producing, directing and starring in his own movie, makes a living as a painter and sculptor — used every skill in his arsenal. With a massive sale of his artworks he began the 5-year long journey to self-funding this movie into being.

Said to be a unholy union (in the best possible way) between Galaxy Quest and Monty Python, coming to you hot off its overseas success, this September 22, This Giant Papier Mache Boulder Is Actually Really Heavy will screen at Rialto Cinema in Newmarket after kicking off with an introduction straight from the horse’s mouth — a film talk with director Christian Nicolson. Following its Auckland release, the film will go on tour throughout the country with screening dates and Q&A sessions in place for Rotorua, New Plymouth, Opunake, Levin, Hastings, Motueka, Takaka, Westport, Hokitika, Greymouth, Wanaka, Alexandra, Gore, Dunedin, Christchurch, Kaikoura with more to be added.

Staying in Auckland for Queen’s Birthday? These are the best things to do this long weekend