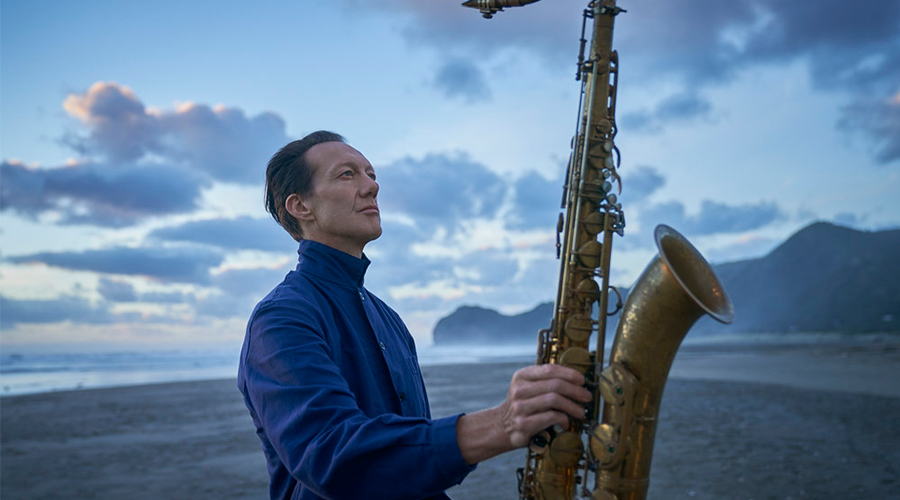 One of New Zealand’s most successful saxophonists and a recognised authority on all things jazz, Nathan Haines, with his colouring-outside-the-lines approach to music, has had an undeniably impressive career. The musician has released 10 remarkable albums, won the Tui Jazz Album of the Year three times and staged incredible performances at some of the most renowned jazz clubs in the world. His monumental 1994 album Shift Left, despite being released 25 years ago, is still one of the biggest jazz albums this country has produced to date — one that married classic, brass melodies with unexpected facets of hip-hop in ways that nobody had done before.

Now, a quarter of a century on, Haines is set to celebrate the landmark with a 25th Anniversary reissue of the legendary album, alongside a titillating, celebratory performance with the classic Shift Left live band — bringing his palpable stage presence to The Civic on Saturday 24th August. In light of such, we’ve sat down with the jazz maestro to learn more about his major influences, his upcoming show and his outlook on life upon recovering from a recent battle with cancer — with which he was diagnosed in December 2017.

To celebrate Haines’ grand milestone we’re also giving away two tickets to his show — so for those hoping to get their soul satisfied, and their brain a little fried, we suggest you enter your details here. *This competition has now closed. Congratulations Trevor Duxfield*

What has been your biggest career highlight?
Well, this year certainly feels like a highlight in my life so far — surviving cancer, getting my health back, doing these shows and putting the band back together, and then asking to be Musical Director of the Silver Scroll Awards on October 2nd!

What’s your favourite album to date? Why?
The one I’m working on is always my favourite, though I think Squire For Hire has stood up well on a production level. On a personal level, The Poet’s Embrace is special to me because of the study and practise it took for me to get to that level where it was all one take and no overdubs, in a proper ‘jazz’ style.

From Marlena Shaw to Damon Albarn to P-Money, you’ve collaborated with an incredibly wide scope of people. Who’s been your favourite?
Marlena is a great friend and has been a mentor to me. Sharing the stage with her countless times over the last 15 years has been a gift and something I will always treasure.

What’s the best piece of advice you have ever been given?
Play yourself! Don’t play other people’s ideas and phrases.

25 years on, Shift Left still remains New Zealand’s biggest-selling jazz album. Do you expect anybody will be coming to steal that title anytime soon?
Well, that was based on old-fashioned record sales, and it’s all about streaming now. I think Shift Left was a record of its time and resonated with people, and that will always continue with subsequent generations.

There’s a new wave of contemporary musicians who are bringing jazz back into the mainstream, like Kamasi Washington and Nubya Garcia, how do you think these match up to the jazz musicians of yore?
Jazz is about change and about reacting to the environment. There will always be great new music to enjoy that references the classics we all know and love. It’s the same with any medium in art. You can’t just come out of nowhere. You have to have respect for who has been before.

Looking back, do you ever remember there being one, specific moment that made you realise you had ‘made it’?
I’m still waiting to ‘make it’!

You’ve spent a large portion of your life living and producing music in London, how does the UK jazz scene compare to that of New Zealand?
London is a great cosmopolitan melting pot so along with jazz, there is so much culture and music going on it informs the work of those who are lucky enough to call it home. To be honest, I was involved more in the dance scene side of things and the cross-pollination of different sounds than just straight ahead ‘jazz’. That’s what I’m still doing.

You’ve since returned to New Zealand, will you be staying home for good now?
I feel very lucky to call New Zealand home at the moment and to have brought up our son Zoot here — who is now four and a half years old. Having been part of the New Zealand health system for the last two years or so, I also feel very, very lucky that we have such an incredible free health system and infrastructure.

The past few years have been tumultuous for you, undoubtedly. Did you ever consider not returning to music, following your cancer battle?
Never. Not once. It was actually the opposite.

Do you think the experience has affected the way you produce music now?
Any life-threatening experience teaches us what the big picture is… and it’s not about ‘likes’ that’s for sure.

Tell us about your upcoming show at The Civic, what can we expect?
I have re-assembled the original band from the Shift Left album from 1994 — Richard Hammond the bassist is coming out from New York just for the shows. Manuel Bundy, our turntablist, is dusting off his scratching fingers, and we’ve already started rehearsing. We play pretty much the whole album, but as it’s a two-hour show I get to play lots of other material as well. Shift Left was just the start for me and I’ve made ten albums since then.

Revisiting the album you made all that time ago must be strange, surely?
It’s been super cool, and luckily we’ve managed to update some of it and bring something new to the show. It’s not a retro thing!

You will be reuniting with the original Shift Left band after not performing together for more than two decades, how does this feel?
I still play with a lot of the guys anyway, but to re-assemble them in total and play this music is a real trip.

What’s in the future for Nathan Haines, both professionally and personally?
I’m working on album number 12, and I’m practising and writing and enjoying being alive. I’m also re-launching Zoot Music with my wife Jaimie, which is the commercial part of what we do — music, playlists, soundtracks, events and much more. We have collaborated with Sam Southwell (from Studio South) on our new website, and we plan to go live with this very soon. I’m also a father and husband, which is way more fun and important than making records.

Nathan Haines and the Shift Left Band will be performing at The Civic on Saturday 24th August, tickets and information to the event can be found here.

Wondering what to watch next? These riveting new TV shows belong on your radar

The perfectly idyllic weekend escape. One of our f

GIVEAWAY! To celebrate love in all its beautifully

Beautiful capture of Mt Taranaki emerging from the

Fancy an afternoon swim at this minute island in t