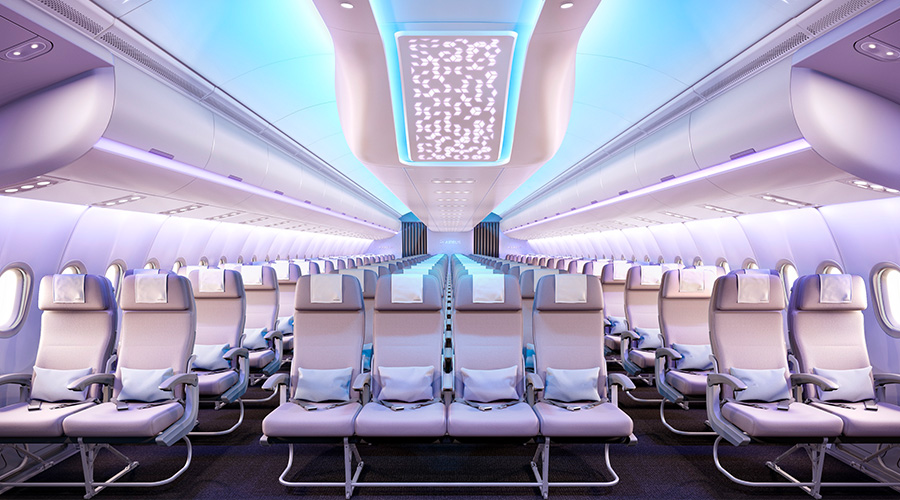 As you think about jetting off for finer pastures this summer, capitalising on the annual two-week break, just think: could your next passport be embedded under your skin? The answer is quite possibly. It’s an idea that conjures scenes from The Manchurian Candidate, where microchip implants are used as a means for tracking down rogue agents, but in reality, it’s just the beginning of a new phase in bio travel that involves new methods of facial recognition and corporeal recovery.

Inflight Wellness
With 17+ hour flights somewhat normalised in 2018, airline companies are paying more attention to their passengers’ wellness with a slew of research being undertaken. The new Airbus A350 jets, of course, have the fancy windows that fade from orange to deep blue to better simulate the circadian rhythms of those on board. With the effects of being sedentary for so long also under scrutiny, airlines meals are undergoing a welcome overhaul to include in-flight meals that feature fewer carbs, lighter courses, and more ingredients that are rich in water to combat the effects of dehydration. What’s more, the new planes from both Boeing and Airbus are offering better cabin pressure and humidity levels for quicker recovery upon arrival.

Microchips
The wheels are already turning in Sweden where more than 3,000 people are currently testing microchip technology as a means of easy identification. Swedish rail operator SJ Rail is trialling a ticketing service whereby confirmation of a trip is sent directly to an electronic tag, around the size of a grain of rice, that is implanted via a syringe under the skin on the back of a person’s hand, then scanned by the ticketer. It’s also worth noting that In 2016, Swedish biohacker Andreas Sjostrom became the first person to pass through an airport (including security, business lounge and gate inspections) with only a near-field communication (NFC) chip. Where boarding passes have evolved to become QR codes on a phone, the next phase is removing the phone altogether.

Facial Recognition
In January of this year, Dubai Airport steamed ahead with implementing iris and facial recognition kiosks that take one or two seconds to identify passengers. According to Mark Clifton, CEO of Princeton Identity (the company responsible for the installation of the new-age gates) “Iris recognition is the most reliable form of biometric identification.” Similar technology has recently been implemented in American airports. With the Middle Eastern travel hub committed to seamless travel, the airport has also been working on a tunnel equipped with 80 cameras that will scan the faces and eyes of passengers as they walk through it, gazing at entertaining scenes such as that of an aquarium. At the end of the tunnel, they will either be bid a happy journey or directed to authorities for further checking. It’s due at any day now.