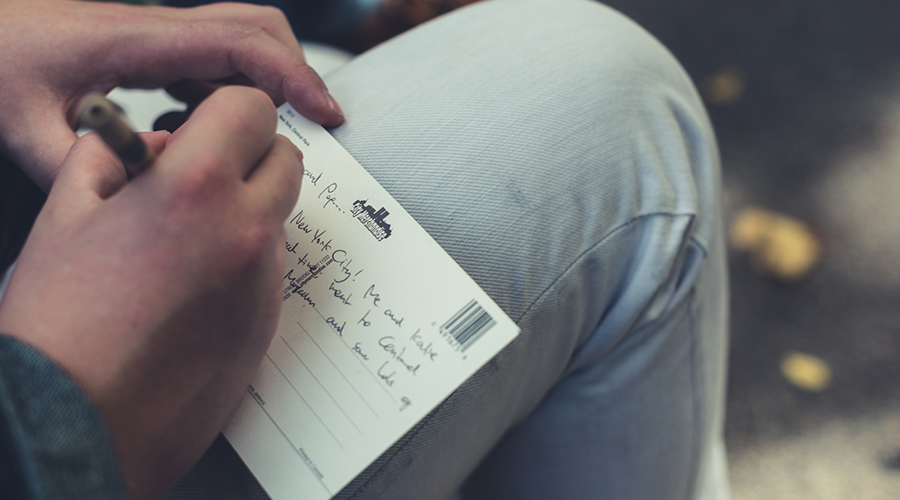 Last spring, I decided to sort through a pile of letters and postcards. They’ve arrived in my letterbox one-by-one over the last 10 years and have been outgrowing their home, the shelves of my writing desk. It’d been a long winter, which started with losing someone I loved. Of all the many spring cleaning jobs, this seemed like the warmest.

There was a medley of postcards from a summer romance, written during the stopover on her flight back home. A birthday card from a parent who isn’t here anymore. Newlywed photos of a couple that has since split.

Before I binned any of the letters (as a cleanse it wasn’t very successful, I only dropped 10) I took pictures of them and sent the .jpg’s to their senders. One of these Penpals gave me enthusiastic permission to biff her letter. Another is currently working at the Swedish Opera, after dabbling in floristry. Ashley didn’t reply. I think her life has blown up since she used to send me parcels — she has a book deal, averages 400 likes on Insta, and recently featured on Goop.

For Renee, I went to the extra effort of making a compilation of my favourite songs from the fifteen mix CDs she had sent me over the years and sent it to her home in Amsterdam. It turns out she lives in the States now.

One of the postcards is from Zoe, who I met online. Zoe was a gem — conscientious and caring. Her postcard lives on my fridge, image facing out with her beautiful, tightly-packed handwriting on the back. When Zoe was a tween, on the Kapiti Coast back in 2001, she had 45 concurrent Penpals. She’d come home, get her daily mail, and write three letters back. She said her Penpals were mostly ‘Petpals’, chatting about cats, and they included a group of friends from Kyoto. I wondered what she was up to now.

Somewhere in the pile, there is a hand-delivered Christmas card from an ex. She wished me a summer as exciting as ‘the’ crazy summer but didn’t leave a return address.

Sifting through it all, I was left to wonder — is there anything more thrilling than a well-travelled package in your letterbox? Are our twenties a halcyon time for getting and giving mail… because of all the travelling and mingling, and the having time to write? Or did Tech kill the Letterbox Star? Alas, I don’t get much mail anymore, and not just because a mail thief is doing the rounds.

When I think back, I can pinpoint when the world was flipping from sentimental to digital, and we tried to combine the two. People would post enigmatic song lyrics as their Facebook update. But there is something lost when the words are just pixels. Digi comms make it easier to reach out, but mail is special. It requires old school thought and real effort.

It is a rare person who can sustain a Penpal-level of dedication in this day and age, but to send something — a postcard, a birthday card, a few photos, or best, a bona fide letter — is to build a bridge between you and that person. Whatever their form, the written keepsake harnesses unbridled sentiment, personality-ridden prose and unique handwriting that helps us develop as people and as writers.

If you think you don’t have anything to write about, think again. Jon McGregor, an author and creative writing professor at the University of Nottingham, recounts how he spent his 30-mile commute to college writing letters to the people he saw on those journeys. “The boundary between fact and fiction was blurred, but in truth, we were only asking about each other’s lives. Through these letters, I was learning about the small corners of the world my friends inhabited: in towns in Dorset and Devon, in south Wales, in north London, in the West Midlands, in Kent. These letters were making physical journeys from places I’d never been, bringing news from elsewhere.”

My own letter collection is my favourite personal archive. I leave them lying around so that now and then, I will pick one up and be thoroughly charmed by reading it. My advice? Open an envelope, stick some stamps, and send something to someone who will appreciate it. It’ll make their day. And if they’re sentimental, there will be days when they go back and retrace their steps, too.

Gucci Lifestyle creates a sense of magic with a chic collection of stationery, games and travel sets for the festive season