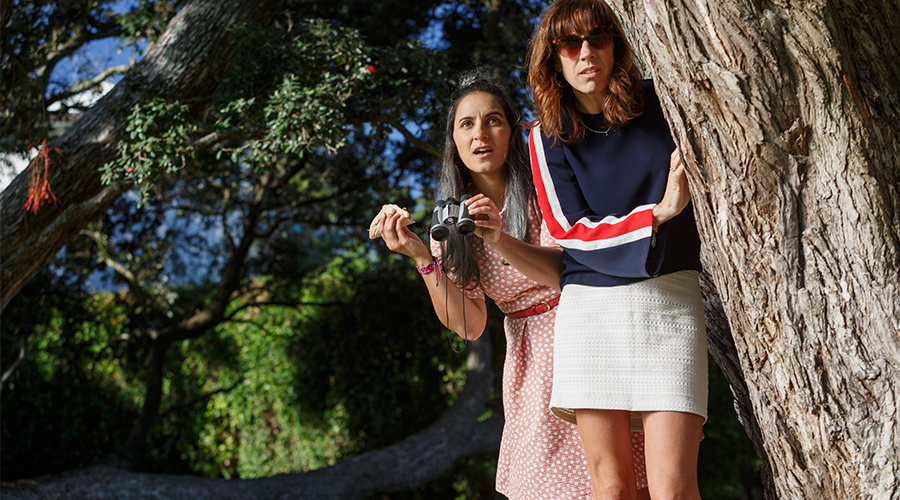 Co-writer, co-director and one half lead act in the soon-to-be-released hit NZ comedy film of the year, The Breaker Upperers, Madeleine Sami (along with her collaborator Jackie van Beek) has been garnering global attention for her unique brand of kiwi funnies. Taking a few minutes to talk to us off the back of the film’s SXSW premiere, here she opens up about America’s perception of the cult genre and whether she has ever hired a third party to break up with somebody.

You recently presented The Breaker Upperers to the world, holding its world premiere at SXSW — what was that experience like? We didn’t expect it to be a kind of typical festival film as comedies don’t normally get into festivals. But SXSW is not your average. What we discovered while we were there was that they really do get in there and support female comedy. A bunch of female-led comedies have premiered there like Bridesmaids and Trainwreck, so it was very cool to be thought of in that vein. It was described to us as a real fans festival but with all the critics and reviewers who come to it, who responded well to the film, it’s been a really great launching pad too.

The ‘Kiwi comedy’ genre is gaining traction in Hollywood. What do you make of the American perception of it? I think there’s a real appetite for it — at least that’s what I picked up being over there with this film. Especially given the mainstream appeal that people like Taika [Waititi] have seen with their distinctly New Zealand brand of comedy, which I think is quite dry. It’s funny being a kiwi trying to describe it because it’s kind of just what you do… it’s just our humour. I think what Taika did with Thor has brought it even more into the spotlight. It’s exciting that we don’t have to round out our accents anymore, that overseas audiences are really responding to it.

What do you make of New Zealand’s presence on the global film stage right now? I feel like New Zealand film was known famously in the past for dark brooding dramas — Lord of the Rings obviously, The Piano, In My Father’s Den. And then suddenly there was Flight of the Conchords. It’s exciting to see that there is some kind of movement of comedy happening out of New Zealand. It is exciting that it’s happening and that it’s happening with the younger generation of comics — stand-ups as well — who are doing really well overseas.

Have you had bad breakups in the past? Is this method of going separate ways something you have thought about doing yourself? That was Jackie’s idea, she had this idea that it would be great to outsource your breakup, called me because she thought that it would be a great comedy and I instantly just fell in love with it. As soon as it came in I was like why haven’t we done this yet. And, we started writing it basically. Have I thought about it myself? No, I’m not sure about this attitude. I think people should be more upfront and honest. But I am a happily married woman who probably cannot connect to the way people date nowadays because I have been in a relationship for the last nine years. If you want to break up with someone, you have to do it — own your feelings, be responsible for your breakup.

I haven’t seen the movie but what, in your words, is the biggest takeaway from it? It’s about all kinds of relationships — normal ones, dysfunctional ones, and unconventional ones too. It’s a comedy, a romance, and at one point, it’s mainly about the friendship between my character, Mel, and Jackie’s character, Jen. I think the big takeaway is that your problems will come back to haunt you if you don’t deal with them. That, and also that unconventional relationships are fine and it is okay to be a bit fucked up sometimes.

The Breaker Upperers is in cinemas 3rd May. Click here to watch the trailer.