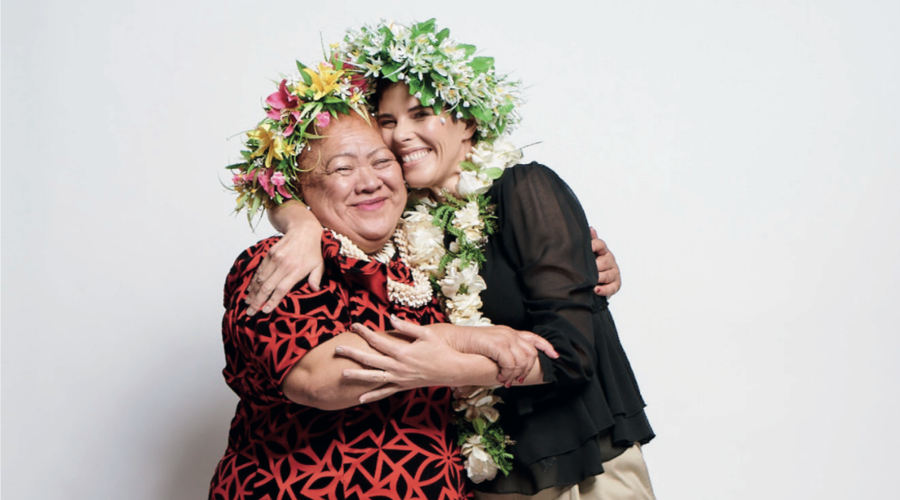 Karen Walker has joined forces with Cook Islands craftswomen, the Kūki ‘Airani Creative Māmās, to create a one-off gown as part of the Commonwealth Fashion Exchange — an event that brings together 53 countries from across the Commonwealth to celebrate the talent and potential of artisans by showcasing the best of their designs. Set up by Eco-Age with support from The Woolmark Company, Matches Fashion, Swarovski, the Commonwealth Fashion Council and the British Fashion Council, the event encourages new partnerships, trade networks and sustainability.

Representing New Zealand, Walker’s collaborative effort has seen the creation of a formal, strapless ‘Tivaivai’ gown with a structured bodice and complex bow. Made from six metres of dusty pink, Italian wool flannel, the dress is embroidered in claret-coloured flowers — both Cook Island native species and Karen Walker’s signature daisies — and seamlessly blends Cook Island culture with Walker’s own influences. A traditional piece that represents a manifestation of love and honour, the tivaivai is seen culturally as the ultimate gift — to wrap someone in one is to cover them in love, and no woman should be without one.

Learning of the cultural mores around this garment and observing the artisans’ processes imbued the work with a sense of “awe” for Walker, who reminisces on the “very special project” with extreme fondness. Unveiled today at a special reception at Buckingham Palace in London, the pieces will move to Australia House on the 21st of February, where they will be open to public viewing in the lead up to the Commonwealth Heads of Government Summit (in April).