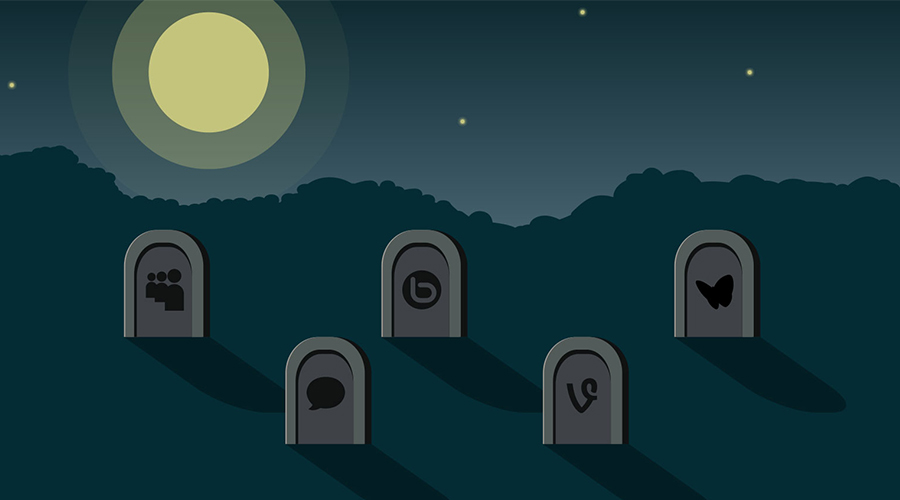 Essentially, the only way to gauge whether someone is alive or otherwise is if the word ‘remembering’ is attached to their profile

It’s a macabre subject, to say the least. A little like those Cigna Funeral Insurance ads that try as hard as they can to put an upbeat spin on your impending expiration. But when the worst happens, one’s digital footprint often comprises the final and most meaningful memories of a loved one. It’s a thought that struck me when listening to a podcast called The High Low. Hosted by the savvy British journalist duo of Dolly Alderton and Pandora Sykes, on a recent episode, a listener had written in about the fickle and unresolved nature of social media after death. The contributor spoke of her own distressing experience with Facebook after her brother died while on leave with the British army during his tour of Sierra Leone.

“Hundreds if not thousands of virtual notes of sympathy, memories and photographs were posted on all of his social media channels which, at the time, were of great comfort to our family,” she began. “Months later, when having a bad day, I went to look at the last messages he sent me on Facebook and I found I was unable to search for him. This is because someone had logged into his account and blocked me and my mother. Words cannot describe how horrible it feels to have someone take away what is essentially a part of my brother’s life. The small messages of ‘I love you’ and the ‘xx’s’ are gone,
and they meant as much to me as a handwritten card or note.”

The victim — in this case, it feels only right to call her such — describes her subsequent contact with Facebook like hitting a brick wall. “As the executor of his will, I had rights over his physical estate, yet his virtual one could not be claimed and the block still exists. It is devastating with social media being such a pertinent part of our lives that it is one of the least controlled, especially after a person dies.”

It’s an issue that rears its head from time to time in the media; social platforms don’t know how to take into account their users’ deaths, of which thousands occur every day. For each there is a different protocol. At Facebook, the first person who notifies administration of a user’s death is asked to supply a ‘legacy contact’ who can manage posts and friend requests thereafter, when the account becomes ‘memorialised’. On Twitter, the account is deactivated with a history of tweets provided on request. On Gmail, they set up a timed email to a designated person letting them know the account hasn’t been used for a set period of time (whether that be for three or 18 months).

Artist and researcher Caroline Sinders argues that the language used by social networking websites for the accounts of their deceased is evidence of this. “They’re typically referred to as ‘inactive’ or a ‘legacy account’ after a user has passed away, and sometimes they are simply ‘shut down.’ For Google, you’re not deceased, you’re just away from your computer for a very, very long time,” Sinders writes. And nowhere will you find the word ‘death’ used. Essentially, the only way to gauge whether someone is alive or otherwise is if the word ‘remembering’ is attached to their profile, as is the case with Facebook.

Much like those Cigna ads, it’s one of those uncomfortable ideas we don’t give much thought to; whether our digital selves will survive death, who will inherit our vast estate of PayPal accounts and Facebook messages from far-off friends. To this day, a dear family friend still exists on Facebook, her account unmemorialised, as though she were still but a ‘like’ away. Lack of awareness around posthumous protocol has meant this memory totem will likely remain untouched for fear of losing it altogether. The risk? That anyone, including a stranger, could swoop in and close it off to close family members.

Back in 2013, it was so easy to do this that it became popular for people to prank their friends by reporting them dead and thus locking them out. Even more disturbingly, in 2017, a woman called Liza Menzo Santoro was murdered by her boyfriend. Having been notified of her death, Santoro’s account was memorialised by Facebook yet to her family’s dismay, photos of her and said boyfriend are still displayed on her feed. Still, little progress has been made in light of such problematic circumstances.

To combat this, government websites say the best approach is similar to that of an official will — to appoint a digital executor who will see to your digital assets when you are gone. It’s not an arduous process and various templates can be found online. While not legally binding, a digital will should list all of your digital assets, from email accounts to photo- sharing platforms, TV streaming subscriptions et al, and whether they should be closed, deactivated, or memorialised.

There’s already so much at stake when we’re given pause to think about the worst case scenario. But it would seem, with the making of a simple list alongside continued campaigning for improved support, the pain of such events could remain at that and not so much worse, as has been the case for those stonewalled by social media.

What does the removal of Instagram likes actually mean? We delve into the recent social media uproar

Arguably the most sought after style of the moment