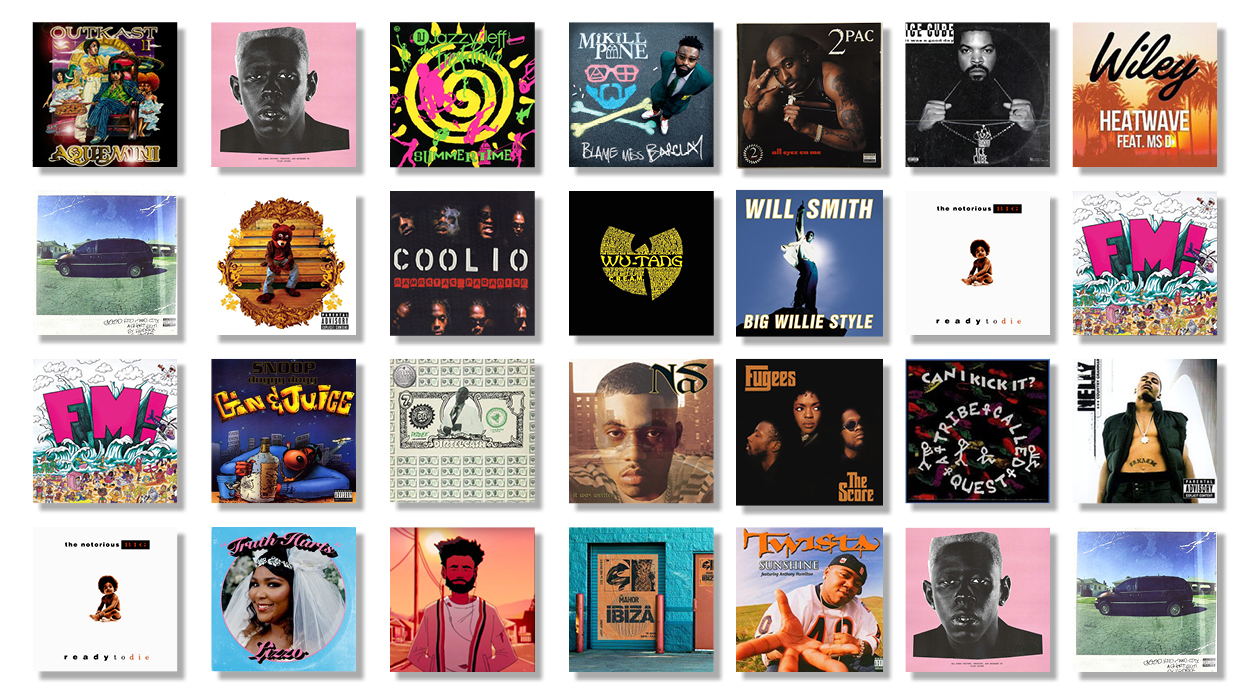 Welcome back to Denizen’s Ultimate Summer Playlist, a series of posts compiling lists of songs that we really think you should be adding to your new-season playlists. A fortnight ago we eased our way in with The Slow Jams Edition, a compilation more catered to early morning brunches or lazy afternoons at the beach than raucous pool parties, but this time around we’re stepping things up a bit — with jams from the hip-hop world.

You can expect a variety of classics, from 2pac to Kanye, but there’s also a medley of newcomers peppered throughout that we think deserve a place in the spotlight, too. So, for those who like their summer jams laden with quality beats and clever poetry — and aren’t afraid of profanities— then read on, these are the songs for you this season.

Twista — Sunshine
It’s impossible not to sing along when the “when I wake up in the mornin’ love, and the sunlight hurts my eyes,” kicks in. The opening sample of Bill Withers’ breezy ‘Opening Day’ sets the tone for a positively chill summer rap track.

Mikill Pane — Summer in the City
Referencing British summer’s bipolar nature — “We need sunshine, today man, I’ve got so many bad weather memories, I might be Rain Man” — London rapper Mikill Pane’s lyrics may not be transferable to a classic Kiwi summer, but the catchy whistling groove and Pane’s dapper spitting approach sure at hell is.

Kanye West — Jesus Walks
Boasting a sonic atmosphere and bold lyrics that are elevated by a little gospel choir inclusion, ‘Jesus Walks’ serves as a reminder that Kanye West did once exude musical genius long before his obsession with twitter and a certain inept president took over.

2Pac — California Love
With a funky beat that is packaged alongside a sonic, synthesised hook and tied together with 2Pac and Dr Dre disarming vocals, the first song that 2Pac released when he got out of prison in 1996 is a glorious summer track that will forever live on in hip-hop history.

Ice Cube — It Was A Good Day
‘It Was A Good Day’ is built around the Isley Brothers sample from ‘Footsteps in the Dark’, and is inarguably Ice Cube’s most ‘poppiest’ endeavour. It’s about life’s simple pleasures, like playing basketball, eating a delicious breakfast cooked by mum and… running intersections without alarming the police… and thus makes for an utterly positive summer jam.

The Manor — Ibiza
Bolshy south London rap layered over a hook taken from Bob Marley’s enduring classic ‘Sun Is Shining’, ‘Ibiza’ is a track that makes you want to do nothing but kick back on a sun lounger, the night still young, with a cocktail in hand…preferably in Ibiza.

Will Smith — Miami
A song that just screams summer, Will Smith’s light-hearted ‘Miami’ is brimming with joy and always puts a smile on the face of the lucky listener.

Dizzee Rascal — Dirty Cash
Less obnoxious than his standard ‘Holiday’ go-to summer track, Dizzee’s ‘Dirty Cash’ is more laid back, catchy, and appropriate for any seasonal event. (NB: The Florence & The Machine/Dizzee Rascal mash-up, ‘You’ve Got The Dirtee Love’ is an absolute blinder too, ideal for any summer playlist.)

Tyler The Creator — Earfquake
Tyler The Creator’s latest work is less Tourettes-to-a-beat and more pared-back and emotionally charged. Some would say it’s even romantic. Earfquake, despite focusing on the break-up of a relationship, is markedly upbeat and great to jam along to.

The Fresh Prince & Jazzy Jeff — Summertime
With more seasonal belters under his belt than a Now That’s What I Call Summer album, it’s no surprise that Will Smith has managed to make this list twice. ‘Summertime’ needs no introduction, its a hot weather no-brainer.

The Notorious B.I.G — Big Poppa
The second song from Biggie’s first studio album Ready to Die features another sample from Isley Brothers — taken from ‘Between The Sheets’ — with the rap juggernaut’s distinctive flow layered upon it. It was so widely received upon its release that it was nominated for Best Rap Solo Performance at the 1996 Grammy Awards and went on to win at the Billboard Music Awards.

Vince Staples — Feels Like Summer
Not merely because the title of the track is ‘Feels Like Summer,’ (we could have easily picked his other track, ‘Summertime’) this one makes the list because its chirpy and short and lends itself perfectly to pool parties under the sun.

Snoop Dogg — Gin N Juice
If a song begins with the literal sound of an alcoholic (we’re presuming) beverage getting poured into a glass over ice, then you know that what’s to follow will radiate summer vibes. ‘Gin N Juice’ does exactly that.

Lizzo — Truth Hurts
The vocal powerhouse turns to rap in this bonus song from her fresh album, ‘Cuz I Love You,’ — which was originally released in 2017 but re-released this year to critical acclaim — and creates an instant summer jam in the process.

Nelly — Country Grammar
Why is Nelly’s ‘Country Grammar’ so enduring? (Or the entire album itself, for that matter.) Is it because it defined an era of rap? Is it because Nelly’s cheeky chappy delivery makes drive-by shootings sound whimsical? We have no idea, but it is, nonetheless, and will remain that way for years to come, no doubt.

Wiley — Heatwave
One of British grime artist Wiley’s earlier bangers, and his first-ever solo No.1 no less, ‘Heatwave’ is a jam that just oozes summer feels — from the colourful backing track to the seasonal-appropriate lyrics: “sippin’ a cold beer, sunshine in your face”.

Wu-Tang Clan — C.R.E.A.M
An acronym of the collective’s money-orientated mantra, Cash Rules Everything Around Me, ‘C.R.E.A.M’ is a more relaxed track taken from the ‘Enter The Wu-Tang album’, with a chilled storytelling bent.

Kendrick Lamar — Swimming Pools
With its incredibly catchy hook ‘Swimming Pools’ makes for a perfect song to be played when lounging around the, well, swimming pool. It’s so perfectly suited to a sun-drenched pool party that it’s easy to overlook the lyrics, which actually discuss alcohol abuse.

Coolio — Gangsta’s Paradise
Coolio’s soulful ‘Gangsta’s Paradise’ is a damn good tune for multiple reasons, including its thoughtful lyrics, distinctive flow and pop-culture music video, and as such it’s release in 1995 became a defining moment in rap history.

Childish Gambino — Feels Like Summer
Gambino embodies pure summer vibed with this track, and the accompanying video is just as pleasing. It features an animated world littered with the who’s who of the industry, with cameos of everyone from Beyonce to Will Smith.