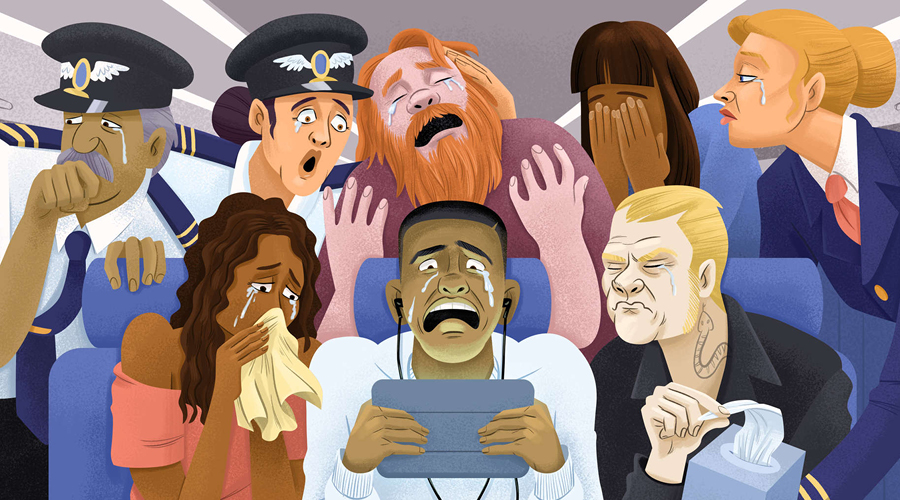 You’ve settled down in your seat. The meal service has delivered its signature mystery-meat curry with flavours that are vaguely Asian. You’ve poured some pinot into a plastic cup and you’re watching one of those highly-staged documentaries about the lives of Hollywood housewives. Next thing you know, you’re blubbering into your wine at the dramatic pinnacle of the story’s fairly generic arch, and despite the fact that you know you’re being ridiculous, you just can’t help yourself. Well, you’re not alone. This seems to be a phenomenon experienced by a number of flyers — frequent or otherwise — but why?

Despite most of the research being largely anecdotal, crying in planes is due to factors that include a loss of control, a lack of distractions, a distinct sense of loneliness and/or part of the body’s physiological response to altitude. A 2017 study done on passengers at London’s Gatwick Airport found that men were 15 percent more likely to cry during an in-flight movie compared to a six percent increase in women. Perhaps this proves that being in the air allows those less comfortable crying in their day-to-day lives to feel they are in a more neutral, anonymous space. But the lack of meaningful interaction in air travel can also render an aeroplane unmistakably lonely. Quietly contemplating feelings in a seat with barely any distractions can lead to outbursts of emotion that usually would be suppressed, meaning even the smallest tug on the heartstrings — be it from a waffly reality show or a cheesy love story — is enough to elicit the kind of reaction usually reserved for an Oscar-worthy drama.

There is also compelling research detailing the physical effects of flying. Lower air pressure can result in mild hypoxia — oxygen deficiency — which can cause us to feel vulnerable and significantly deplete our energy. The cabin environment, with air pressure similar to the top of an 8,000-foot mountain, humidity levels lower than some of the world’s driest deserts, and temperatures often set to around 10 degrees Celcius (to offset the heat generated by the bodies and equipment on board) is unfamiliar and alien, and leaves us feeling fragile and fatigued. Coupled with the fact that we’re trapped in a metal tube, hurtling through the air with nothing between us and the earth far below, it’s only natural that a keen awareness of our lack of control can cause emotionally heightened responses to the most banal things.

So next time you’re on a plane rewatching The Notebook or even something as supposedly harmless as a Friends rerun, cut yourself some slack if the tears start falling. Chalk it up to something entirely beyond your control and allow yourself the cathartic outpouring.

Have You Ever Wondered: Is change really as good as a holiday?

Have you ever wondered why you get déjà vu? We delve into this freaky phenomenon