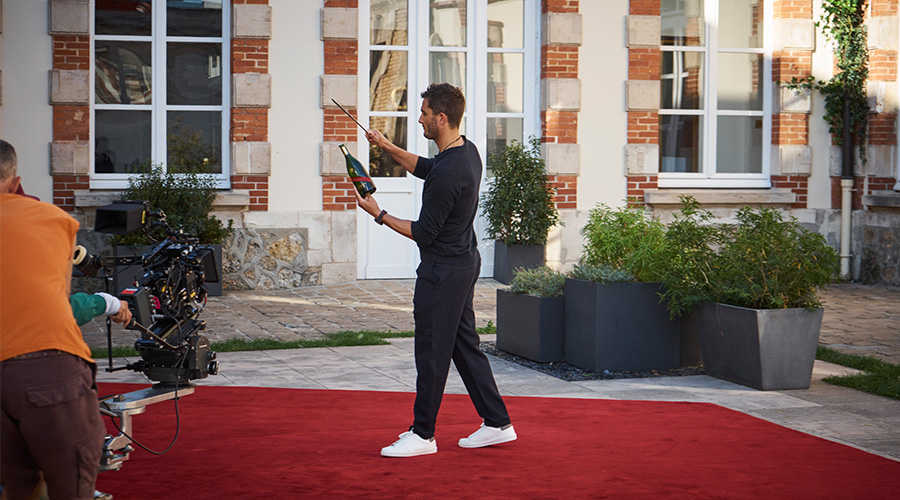 If you spend much time on Instagram, you may have recently spotted a shot of the world’s fastest man on land (Usain Bolt) and, arguably, world’s fastest man on water (Blair Tuke) with arms clasped around one another against Champagne Mumm’s signature red-flecked backdrop. The image marked Tuke’s induction into the brand’s Global Mumm Squad, a group of exceptional people who excel in their respective fields.

“It’s a pretty big honour to be on the Squad — particularly when you look at some of the ambassadors that were in France at the same time,” Tuke explains. “We’re all from totally different backgrounds and experiences, but definitely exhibit similar personalities in the way we have set out to achieve our goals.”

Tuke was sent to Reims, France, all but a fortnight ago to feature in a series of online films that speak of his impressive career achievements so far. When asked what some of the highlights have been, he described filming in the cellars underneath Maison Mumm as being awe-inspiring. “There are 25km of tunnels under the Champagne House housing more Champagne bottles than you could ever count. It’s pretty impressive… and of course getting to meet and spend time with Usain Bolt.”

Tuke says of his decision to align with the famous Champagne brand: “Mumm has always been an icon of celebration and has a long history of association with various sporting celebrations so I think it was a natural fit. Although it probably wasn’t until my trip to France that I really learnt about the brand and their constant quest to push the boundaries in search of victory!”

The sailor’s next stop will be an appearance at Melbourne’s hotly anticipated Derby Day in early November, where we’ve heard he’ll be demonstrating his newly acquired skills in the art of sabrage and mixing with a celebrity-studded crowd. “I’ve never been to Derby Day but from what I’ve heard it’s an epic party. Mumm always seem to go bigger and better than the year before, and last year they brought in a superyacht to the Birdcage, so I’m excited to see what the set up is this time around.”

After celebrating at Derby Day, Tuke will be jetting back to Auckland to celebrate the Melbourne Cup at Soul Bar & Bistro’s sold-out long lunch.

How to pair champagne with food according to G.H. Mumm

Wondering what to binge next? Discover these captivating TV series and movies