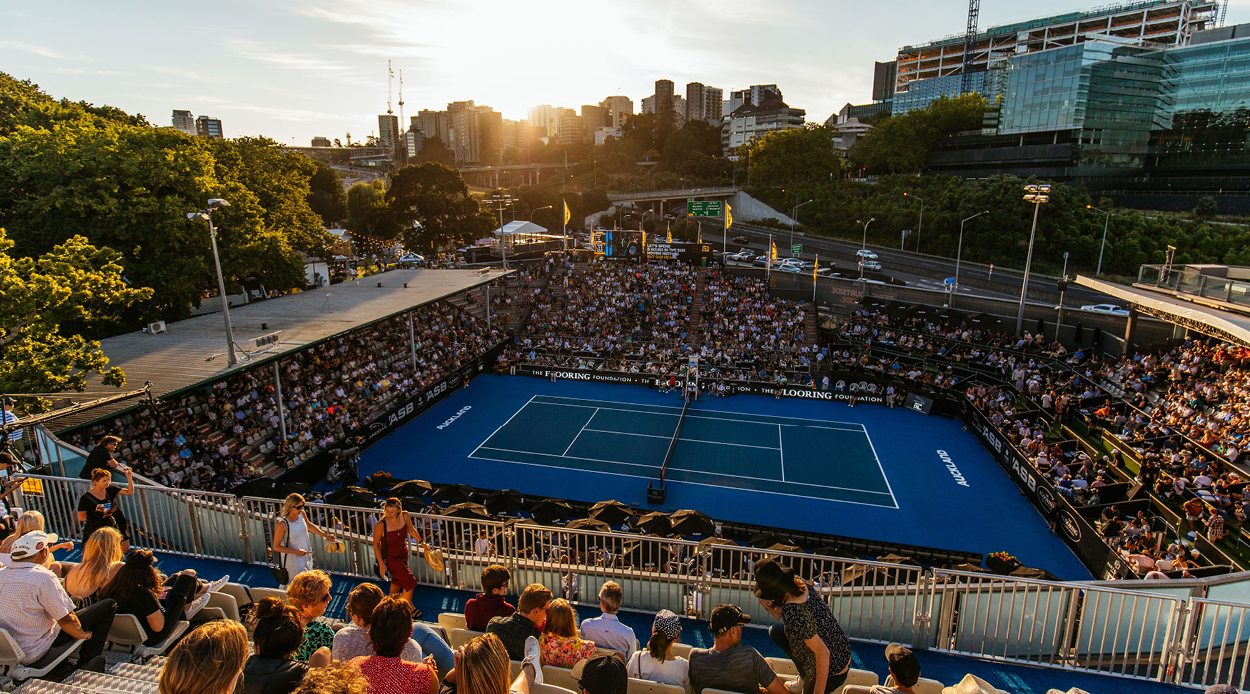 The nation’s most prestigious tennis tournament, the ASB Classic is renowned for being one of the best events to kick off the new year — providing hospitality and entertainment in spades. And in 2020, it has taken things up a notch. From the strong line-up of players to the food and drink vendors to the new-and-improved facilities, this is everything you need to know about what to expect from this year’s ASB Classic.

The Food and Entertainment:

Moët & Chandon Ice Rocks Lounge
Moët & Chandon’s new Ice Impérial Rosé — the world’s first and only rosé champagne designed to be served over ice — will be made available for the first time in New Zealand at the ASB Classic, where Moët & Chandon’s Ice Rocks Lounge is set to be the social hub of the tournament. Over two levels (with dining and bar spaces upstairs and a pool downstairs) in the middle of the ASB Classic’s entertainment area, ‘The Serve’, the luxurious, pink-and-white lounge will be the perfect place to congregate for a refreshing drink, and to watch all the on-court action via poolside screens.

Lobster & Tap
The ASB Classic would never settle for the usual sports-match fare. This year, they’re taking it to the next level by inviting Lobster & Tap — the Auckland Fish Market newcomer dedicated to serving delicious lobster rolls — to set-up at the tournament. Punters can choose from either the Classic roll, which sees the lobster slathered in creamy New England mayo or (our favourite), the Hot Buttered, where the lobster is doused in clarified butter and sprinkled with lemon and chives.

Jaguar Race The Pace
To keep you entertained, Jaguar’s virtual and dynamic gaming vehicle will be landing at the ASB Classic as part of its national tour. Event-goers will be invited to immerse themselves in Jaguar’s Race The Pace, an engaging test drive experience with the F-PACE SVR which has been converted into an Xbox controller. Race against times that have been set by the ASB Classic tennis stars to be in with a chance to win one of the many spot prizes on offer.

Denis Shapovalov
Another young and rising talent, Denis Shapovalov is also set to join ASB Classic line-up next year. He is the youngest player to make it into the top 30 since tennis legend Rafael Nadal in 2005. And this year, the Canadian national took home the ATP title as well as seeing his ranking reach a career peak of 15 in the world.

Karen Khachanov
Currently ranked number 8 in the world, Karen Khachanov has a strong track record which includes facing Rafael Nadal in the finals of the French Open. The 23-year-old has had a particularly consistent year and as such, we’re anticipating a grand show from the Russian player when he takes to the court at next year’s ASB Classic.

Andreas Seppi
This is most definitely not Seppi’s first rodeo as the 35-year-old Italian tennis player has had a long career and his experience is showcased through his confidence on the court. With numerous victories under his belt and ranking within the top 20 tennis players in the world in 2013, people are expecting a breakthrough from Seppi this year.

Daniil Medvedev
Medvedev has had a huge year in 2019, ranking at number four in the world in September, at just 23-years-old. He has an impressive track record, including the win of seven ATP singles titles and two Masters 1000 titles. Most recently, Serbian tennis superstar Novak Djokovic stated that his match against Medvedev was “Definitely one of the most exciting matches I have played against him or any other top player last few years.”

Fabio Fognini
It seems as if the Italian tennis player, Fognini gets better with age. The 32-year-old broke into the top 10 rankings only this season and completely shook the scene at the Monte Carlo Masters where he beat the legendary Rafael Nadal and world number three Alexander Zverev. Fognini gained his first at the Masters 1000 level and made it as number nine in the world.