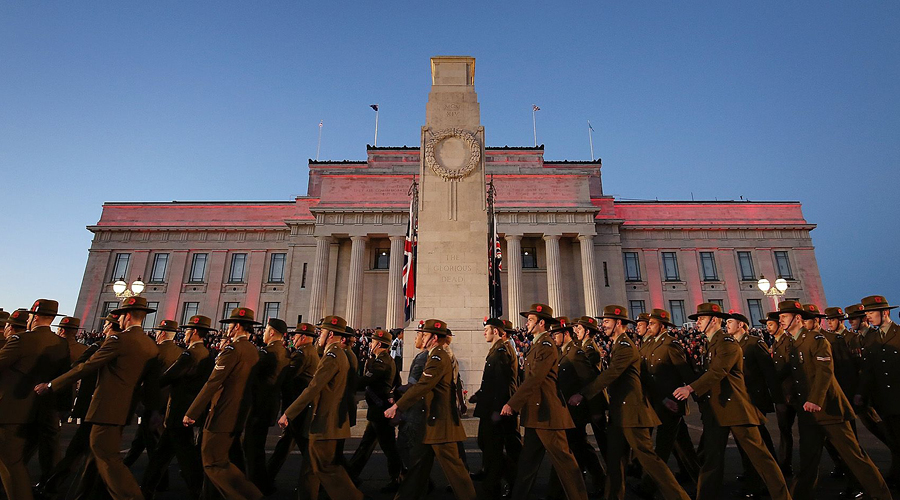 A day to pause for thought, ANZAC day reminds us to acknowledge the men and women who fought for our freedom and who serve today. Reflecting on the stories my grandfather relayed from his experiences in WWII, going to the dawn service and wearing a red poppy is my small way of saying a silent thank you so him and so many others. This Wednesday, mark the day with some of the best commemorative services and activities around Auckland.

1.Attend the Auckland Domain Dawn Service
Auckland’s biggest dawn parade takes place in front of the War Memorial Museum in the Domain. With formalities set to kick off at 6am centered around the stoic Cenotaph, this is the best way to start an ANZAC morning — albeit the earliest. See here for the full list of services around Auckland.

2.Celebrate on ANZAC eve at St David’s Church
The Friends of St David’s Trust is inviting everyone to commemorate ANZAC day and celebrate the release of Southern Star —Te Tonga Whetu o te Rangi, an artwork by Warwick Freeman, Art Laureate of The New Zealand Arts Foundation. The pin was crafted in New Zealand from pure brass and individually stamped by the artist himself with its own identifying number. Celebrating this important work, St. David’s Church will be lit up with a spectacular light and sound show projected onto the building’s facade. With Mayor Phil Goff officiating, more interactive artworks, and live performances by bands, choirs and bagpipes, we suggest you head to the church with the whole family in tow on Tuesday the 24th at 6:30pm to show your support.

3.Watch the Vector Lights on Auckland Harbour Bridge
Teaming up with the RSA, the Auckland Harbour Bridge will be illuminated to commemorate ANZAC day with a light and sound show starting at 5am on Wednesday morning — to coincide with the dawn services — and play again from 6pm until midnight. The lighting design will be accompanied by ‘Sons of Gallipoli’ as sung by the Auckland Boys Choir, followed by The Last Post. Those watching the lights from Viaduct Harbour can listen to the soundtrack here and anyone who can’t make it to a suitable vantage point can view the live stream online.

4.Contribute to The Giant Poppy Peace Project at Depot Artspace
Artist Tony McNeight invites you to visit Depot Artspace this ANZAC day to participate in his interactive exhibition, which will see participants writing messages of peace on poppy petals that will be combined to create one giant poppy. In 2015, it was McNeight who created the biggest poppy in the world in the Auckland Domain, before creating another large Poppy of Peace in the French town, Arras, that was liberated by New Zealand soldiers in World War I.

5.Treat yourself to The Caker’s ANZAC themed cake
Local baker extraordinaire, Jordan Rondel (a.k.a The Caker) has released a recipe for a golden syrup and coconut cake with crunchy, oat crumble, as an ode to the trusty ANZAC biscuit.  Inspired by the story of how our favourite ANZAC day treat came to be, Rondel’s cake embodies the flavours and textures of the sweet biscuit, with golden syrup and topped the necessary crunch. The perfect activity to do with the family on a day off.

6.Toast to the troops at Chapel Bar & Bistro
From 1pm, head to Ponsonby Road’s Chapel Bar & Bistro to raise a glass to the brave soldiers who serve. All in uniform will receive their first tap beer free and with Thane Kirby on the decks from 2pm, followed by General Lee at 7:30, it’s set to be a celebratory atmosphere (free of surcharge).

These are the best ways to commemorate ANZAC day this year

The winner of The Heritage Award, presented by Land Rover — Paul Baragwanath