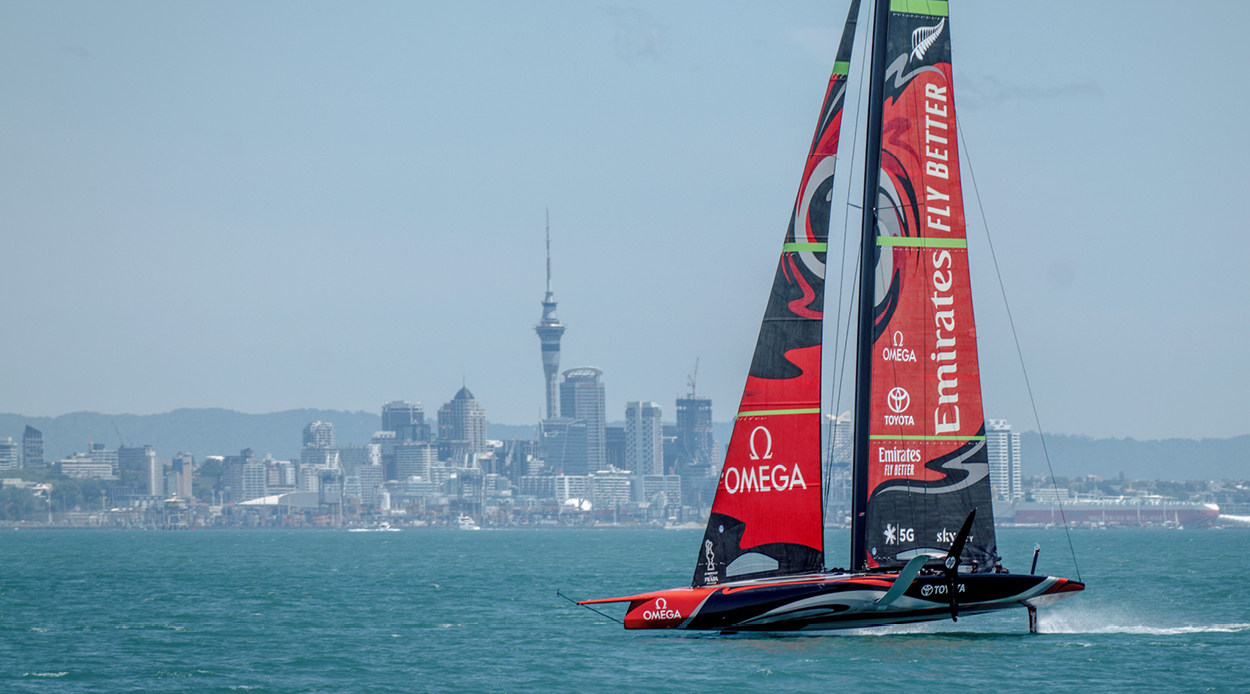 Now that the Auld Mug is back in New Zealand and the 36th America’s Cup is well underway, we thought it high time we outlined the rules to know, explored the new technology and underlined the key races to help keep everyone’s heads above water. We’ll be dusting off our red socks when Emirates Team New Zealand finally takes to the harbour… will you?

What you need to know
First and foremost, the 36th America’s Cup will be a little different from the last few. In many ways, it will mark a return to more traditional notions of the sport (and sportsmanship in general) with the Kiwi hosts positioning themselves as arbiters of the spirit of the America’s Cup. Some might see this as a reaction to the innovation-at-any-cost approach taken by American software mogul, Larry Ellison, who set the agenda of the two previous events. (His ‘modern’ ideas made the America’s Cup feel more about deep pockets than sailing prowess.)

The protocol that governs the 36th America’s Cup has been agreed upon by the ‘Defender’ and the ‘Challenger of Record’ (C.O.R), in this case, Emirates Team New Zealand and Prada Group’s Luna Rossa Challenge. Made in the spirit of the event’s Deed of Gift, defining the race as ‘a perpetual challenge cup for friendly competition between foreign countries,’ these rules ensure a fair and exciting field of play. Terms of engagement for the main event are set by the Defender, who defines the parameters of the overall competition and decides on the location for the final match.

The Prada Cup (currently taking place until the 22nd of February) sees the challenger teams race one-on-one to accumulate points to determine which will face Emirates Team New Zealand in the America’s Cup, a best-of-seven showdown taking place from the 6th until the 21st of March. Here, there has been a return to the classic defender-challenger split, where the defender stays well away from the Challenger Selection Series. At the 35th America’s Cup, Larry Ellison’s Team Oracle were the first defenders to compete in a challenger series. While they won a point which they took with them to the final, it was a controversial move that went slightly against the spirit of the event, and ultimately, didn’t guarantee their victory.

Alongside the Defender and the C.O.R, the other teams competing for the next America’s Cup are American Magic and Ineos Team UK. Importantly, the new rules have been very specific about the nationalities of crew members. Teams are allowed to have sailors from other countries, provided their crews are made up of 20 percent citizens and the rest, proven residents, meaning those who have physically lived in the country they’re representing for a minimum of 380 days over a two year period.

The Boats
The high-performance vessels of the America’s Cup sit at the heart of its competition. For the 36th America’s Cup, teams have revived the monohull — a style of boat that was part of every America’s Cup competition from 1851 until 2007. And while it might feel like a return to the ways of old, it certainly hasn’t made the sailing any less exciting. The new AC75 yachts have been putting on a serious (and at times heart-stopping) show. And while they’re larger than the dynamic catamarans of the last few years, their size has demanded bigger crews, a focus on smarter, more tactical manoeuvres and racing that is a little more about skill and a little less about speed alone.

That said, in a bid to level the playing field and put some universal constraints on costs, The Royal New Zealand Yacht Squadron and Il Circolo Della Vela Sicilia introduced The Class Rule.

This rule limited the number of parts that could be built by individual teams and also required more research and development to be done in simulation rather than on the water. It set clear parameters. Teams could use their brightest minds to create the fastest boats within these constraints while having certain components supplied across the board.

While teams were allowed to build two boats each, their first vessels used as an opportunity for testing and tweaking in preparation for their second vessels (to be raced in the main events), no two-boat testing was allowed. Designers had to utilise all the data they gathered from the first iteration, to inform any design changes on the second.

The Racing
There are five different courses on which teams will race over the Prada and America’s Cup (see the full line-up here). This is chosen on the day of racing by Race Management, based on conditions, but at every site, the course itself is roughly three kilometres long, and about one and a half kilometres wide. Known as a ‘windward-leeward’ course, teams race directly into and away from the wind as they complete their required laps (the number of which is decided by the Race Director on the day depending on the wind). Due to the speed of the AC75s, the boat coming in from the left-hand side will enter 10 seconds ahead of its opponent to reduce the chances of a collision.

The goal is for teams to time their arrival to the start line perfectly — an early arrival will result in a head start, with the perpetrator immediately penalised and required to slow down to get behind their opponent. After crossing the start line, teams must race directly into the wind on their way up to the first mark, around which they must decide how to sail, before heading back downwind to the bottom gate and completing their first lap. This is repeated until all laps are completed and the winner crosses the finish line at the final downwind gate.