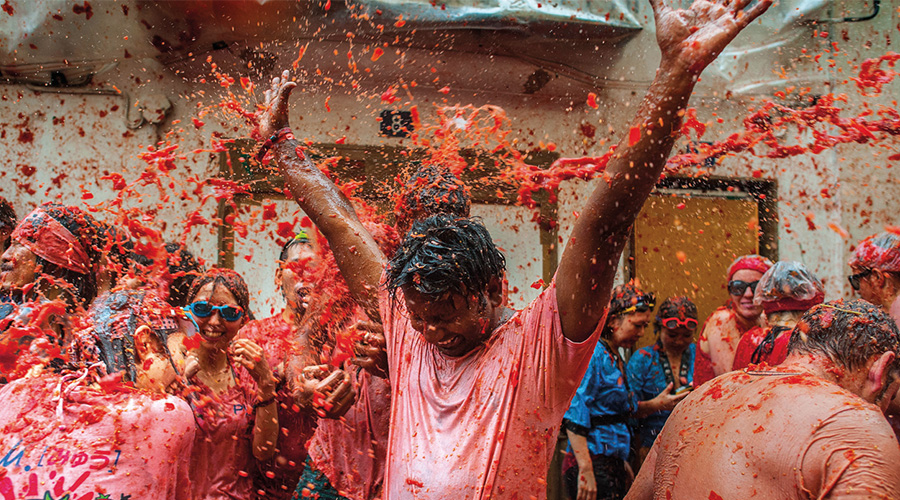 If it’s time to up the ante on your holiday adventures, perhaps with the food fight to end all food fights, or by finally booking in that trip to India, one of the following festivals ought to fit the bill. Count yourself as a more advanced traveller? Well, you can just see which ones you’ve already ticked off.

Day of The Dead
Immortalised in the famous first scene of the James Bond movie Spectre, Day of the Dead or Dia de Los Muertos is known in Christian terms as All Saints Day, a holiday on the 1st of November that serves to remember all those whose spirits have moved on. In communities throughout central and south Mexico, locals rally together, dressing up and adorning cemeteries with offerings so as to help souls on their journey in the afterlife. Hotspots include the island of Janitzio. In the lake of Pátzcuaro, Michoacán, where festivities stay steadfastly in line with those of yesteryear, San Miguel de Allende, the town of Oaxaca, and Mexico City. Flowers, butterflies and skulls (often depicted as la Calavera) are typically used as symbols on the day.

La Tomatina
Dubbed ‘the world’s biggest food fight’, La Tomatina is the tomato-throwing festival held in the Valencian town of Buñol. Designed purely for entertainment purposes, the ticketed affair is held on the last Wednesday of each August and has been going since 1945. The story goes that, back then, some young people were in the town square to attend the ‘Giants and Big-Heads figures’ parade. The young boys decided to take part in a parade with musicians, Giants and Big-Heads figures. The riotous energy caused one participant’s big head to fall off, throwing them into a fit of rage. There was a nearby market stall of vegetables that fell victim to the fury of the crowd. People began pelting each other with tomatoes until the local forces ended the fruit battle. The following year, some young people engaged in a pre-planned quarrel and brought their own tomatoes from home and so La Tomatina was born.

Palio di Siena
Recently, there has been some questioning as to the ethics of this famed horse race but it can’t be denied that it’s a sight to behold; 10 horses and riders, bareback and dressed in the appropriate ancient garb, galloping around the Piazza del Campo. The Palio di Siena is a horse race that is held twice each year, on 2nd July and 16th August, in Siena, Italy. The 10 horses represent ten of the seventeen ‘contrade’ or city wards and it’s arguably the county’s most famous annual sporting event (it’s only been going since 1656). The race in its entirety lasts all of about 75 seconds, so it pays to set up shop in a good spot. That said, the day is filled with fanfare that celebrates the healthy rivalry between the contrade.

New Orleans Jazz Festival
Held in the middle of the Northern Hemisphere spring (the last weekend of April and the first weekend in May), the New Orleans Jazz Festival celebrates the crux of Louisianan culture by way of its famous jazz music scene — arguably the world’s best. Second, perhaps, only to Mardi Gras in terms of its ability to pull in tourists, the festival celebrates a colourful spate of genres from Blues, R&B, gospel, Latin, country, bluegrass and so much more, alongside a panoply of artisan food and craft vendors. Serving up an excellent showcase of ‘southern hospitality’, there are few music festivals that could rival this experience.

Holi
Known as the ‘festival of colours’, Holi takes place somewhere between the end of February and the middle of March and is said to be a ‘thanksgiving for a good harvest.’ Celebrations for the annual festival begin the night before on ‘Purnima’ or Full Moon Day, where people gather to perform rituals around bonfires before embarking on the fully-fledged colour-fiesta the next day. Traditionally celebrated in India, the Hindu occasion has spread further into places like Nepal and is now also celebrated by non-Hindu cultures. On the day of, anyone and everyone is fair game when it comes to being smothered, smeared and splashed with multi-coloured powders. No wonder it’s become so famously captured on film.

Harbin Ice Festival
A very jazzy festival indeed, Harbin has been going since 1963 in the Heilongjiang province of northeastern China (close to Siberia) and last year attracted in excess of 17 million visitors as part of the larger annual winter festival. It’s home to the world’s biggest ice sculptures, crafted by Chinese and international artists alike, which are dotted throughout the city, some of them 250 metres long. During the festival, there are plenty of other activities which include alpine skiing in the nearby Yubuli resort and winter-swimming in the Songhua River. It pays to pack your puffer for this whimsical wintery affair.

Lunar New Year: Here’s everything you need to know about Year of the Ox