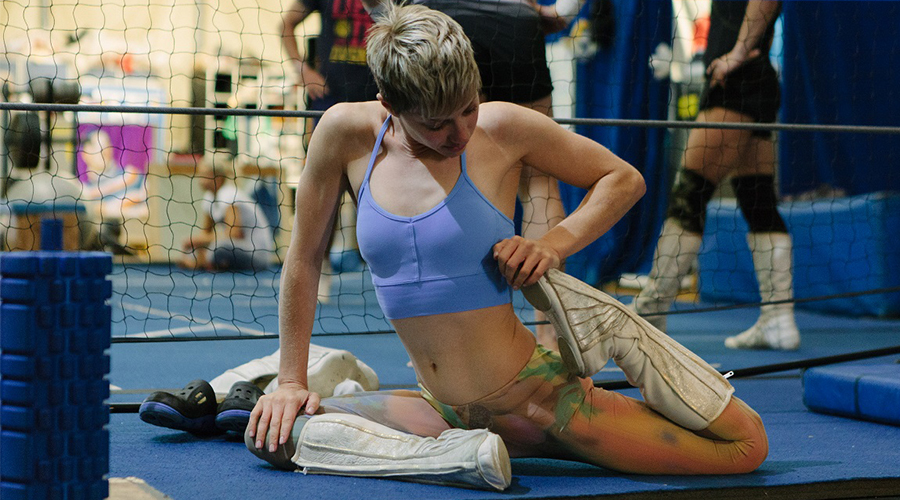 Okay, we admit it. Australian national Laura Kmeto isn’t part of any old circus. She is, in fact, a mainstay in the acclaimed Cirque du Soleil cast, featuring as chief teeterboard flyer in the latest show, KOOZA, coming to Auckland in February 2019. Not only is it her profession to flip, tumble and fall from great heights, but her performance extends into acting as the backup for the show’s main character, The Innocent. Here we ask some burning questions about life in the circus.

What is the difference between an acrobat and a gymnast? Gymnastics is a sport I was trained in for many years when I was younger. An acrobat is someone who covers a whole range of acrobatic disciplines, including circus art. So basically, I’m an acrobat because I am the teeterboard flyer at part of the house troupe which is a circus art discipline which involves tumbling and acrobatic elements. Gymnastics has prepared me a lot for this role because of the similar skills like tumbling, aerial awareness and strength, as well as the agility and the flexibility.

Did you run away and join the circus? If not, how did you fall into your profession? Not exactly. When I was training at the Victorian Institute of sports, some of the girls above me were training for the 1996 Olympic games and then the 2000 games, which is what I was training for. It was there that I heard of some of these girls joining Cirque du Soleil in their late teens which gave them the chance to travel and get college scholarships in the US. It wasn’t until my twin sister and I were in our late teens that we were asked to audition. That was back in 2001. At that point, she got a contract to go overseas and I didn’t so I kept on training in different disciplines before coming back to it. When I finally decided that it was what I wanted to do, I ended up getting a Bachelor of Circus Arts from the National Institue of Circus Arts in Melbourne, which was three years of training and my second degree. I specialised in Chinese Pole and Handstand Contortions. After that, I was able to secure a contract with Kooza.

Does performing run in your family? Both my sister and I have done the performing thing with Cirque du Soleil. My mother was a ballet dancer and teacher. So she got us into the dance/theatre/performance side of things form an early stage.

How old are you now and for how long do you think you will be fit to perform? I’m 34 years old and I got the job just before I was 30. So I’ve been with Cirque du Soleil for four and a half going on five years now. By the time I get to Auckland, it’s going to have been 1300 shows. The only thing that would stop me doing this is my body, and perhaps taking pause to start a family. I’ve witnessed some pretty amazing things in the circus though. There is no upper age limit and some of the high-wire artists are well into their 50s.

It must be pretty gruelling work… how much time off do you get? We work around doing about 300 shows a year. The nature of the way it works means that we don’t always know which cities are going to accept us and for how long. For example, in Seoul, the show is very popular so we will have 9 or 10 weeks of shows there. That’s quite a long stint. Normally, we would do anywhere between 5-8 weeks in each city. In Europe, we did a bit less because we could move around a bit faster. In a single week, we would likely do 8-10 shows, so it is pretty gruelling. But during those periods, we only do about two hours of training as a teeterboard group twice a week as well as our own strength and conditioning sessions on top of this.

From someone with your athleticism, what would be your exercise recommendations for the average joe? I think anything, like pilates, that elongates your body and stretches your spine out is really good, especially for me getting to the age that I am. I also like walking and doing lots of stretching, and things that are weightless on my limbs, like swimming. You can get the cardio you need without having to put so much strain on your joints. I would also say getting out in the fresh air and doing something in the company you enjoy!

Are injuries common when you are performing? I would say that we do a pretty good job of maintenance and we do a lot of prevention work for that reason. Our physios are amazing; we get massages once a week and we’re always doing extra training on our flexibility and joints. For my split leg jump, for example, I did that for two years continuously before I had a little partial tear in my hamstring. I also think the psychology of being in the right headspace when you are performing has a big part to play.

Are there any crazy rules you have to adhere to because of your contract? Not really. I have a personal rule that I have adhered to ever since I was a gymnast and that’s to not take any crazy risks outside of my work. I don’t go skiing on the weekends, for example, so I’ve had to sacrifice going and doing some super physical activities. In my contract, it states that I have to stay under 50kgs as a flyer, but that’s about it.  The only other thing is once we have our makeup on, we can’t go outside, because it’s said to spoil the effect of the show which can stop you from exploring a new city.

Do you have any great party tricks? I’ve been getting that questions ever since I was an elite gymnast at secondary school! It’s funny how people want you to do flips and handstands after having three or four drinks and when you are clearly in a cocktail dress. I mean, you wouldn’t ask a Pilates teacher to get down the floor and do some hundreds or an actress to act out a scene on the spot. I just tell people to buy a ticket to the show!

A return to the intimate and fundamental human elements of circus, KOOZA combines thrilling acrobatic performance with the art of clowning. We follow The Innocent as he takes a journey of self-discovery through a comic kingdom of eccentric characters, electrifying thrills and out-of-the-box surprises.

From what they do to how they help, here’s everything you’ve always wanted to ask a Doula