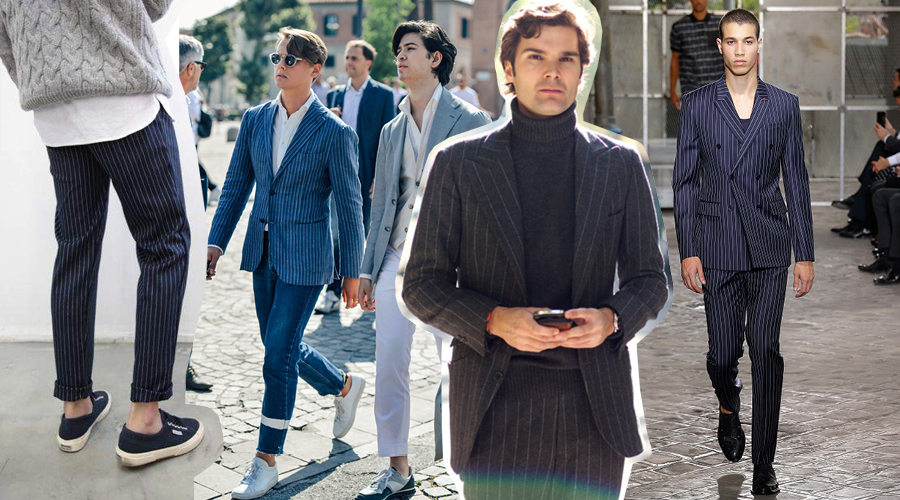 Fall in line with the new and improved linear looks of the season.

After a steady stream of film characters donning the stripe of late, a new breed of pinstripe has emerged that seamlessly blurs the line between work and play. No longer does one need to wear the two in tandem, instead there’s an inclination towards sporting the pattern separately. Givenchy’s re-imagined stripe in their SS16 collection paraded the pin in double-breasted form, paired with a simple tee and brogues sans socks for a devil-may-care attitude. Isn’t it time you embraced your inner Jordan Belfort?

Turtleneck On Top
Do away with the classic shirt and tie combo in favour of a turtleneck for a look GQ have aptly named ‘retro future’. Casual enough for a night out yet dressed up enough for the office, start with a black turtleneck and pair with a slim, subtle pinstripe suit for a lengthened outcome. Or, step into more daring territory and go lighter, favouring a grey slate suit and similarly toned high-neck knit for a visage so impressive, you’ll likely be asked to fill the role of the next James Bond.

Trouser Separates
Gone are the days that suits simply mustn’t be separated. Re-purposing the 80s banker staple, the pinstripe pant is taking its linear streak to the streets. Worn low slung, less tailored and most importantly cuffed, the once formal trouser holds its own when juxtaposed with a casual round neck tee or cable knit jumper and sneakers, topped off with a cooler than cool charcoal coloured coat once the mercury starts to drop

Jacket and Jeans
Yet another excuse to momentarily sever ties between suit jacket and trousers, the pinstripe lends its expertise particularly well with the
denim mainstay. A standard among sartorial folk, it’s best to leave the light-hued jeans at home in favour of a navy selvedge denim, a crisp white shirt and finished with a chalk stripe pin — a more mellow style of pin with imperfect lines. Administer a pocket square only on days when you’re up for the attention

These pieces are essential when building your perfect capsule wardrobe