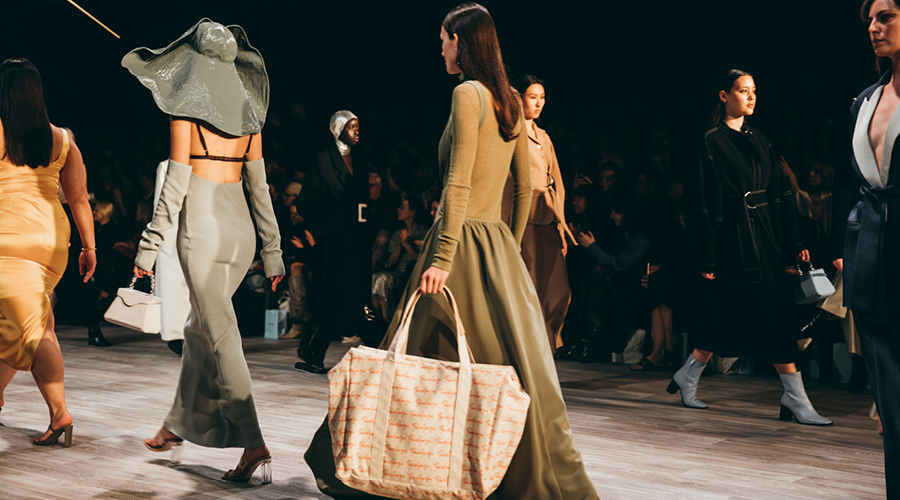 New Zealand Fashion Week has come and gone for another year bringing with it a raft of runway triumphs and emerging designers and proving once again the abundance of local sartorial talent. With sustainability as the central theme of this year’s schedule, there was an overall focus on conscious fashion that permeated every event. From breathtaking runway debuts to first-time collections, these were some of our favourite moments from the week.

Paris Georgia
Creating clothes that universally flatter the female form has long been the modus operandi of Paris Mitchell Temple and Georgia Cherrie — the duo behind lauded New Zealand label, Paris Georgia. And it’s something they celebrated on Tuesday night as the Mercedes Benz Presents designers for this year’s New Zealand Fashion Week.

Taking to the runway (their first-ever, by the way) with a collection that felt like a coming-of-age for the brand, Mitchell Temple and Cherrie curated a line-up of models and muses to bring SS20 to life, beneath a canopy of sculpture — a brass antenna by prolific New Zealand artist (also Paris’ brother), Dane Mitchell.

An evocative soundtrack drew us into the swirling, after-dark elegance of the Paris Georgia world, its heart-thumping beat and crescendos underscoring the same kinds of ebbs and flows in the outfits (styled by Seb Hunt and Dylan Richards) coming down the runway, building to the final look — an ode to the modern bride, complete with glomesh headpiece and white thigh-high boots. It was the perfect closing note for a collection that spoke to its designers’ maturation.

From pieces that reimagined classic Paris Georgia silhouettes (like the wide-brimmed hat in a shiny, slightly-darkened eggshell blue, or the form-hugging, marigold dress that was like the Marnie top all grown up) to pieces that felt entirely fresh (the subtle florals of the unexpected but beautiful oriental pattern, or the off-the-shoulder knit dress), the collection cemented why our expectations for this brand keep rising — and hinted at even bigger things to come.

Maggie Marilyn
Another catwalk debut came from Maggie Marilyn — a brand that has gained some serious ground both here and overseas. Led by its visionary, 25-year-old founder and designer Maggie Hewitt, this label evokes its creator’s breath-of-fresh-air energy, approaching the issue of sustainability in fashion with a joie de vivre that is reflected in its beautiful colours, fun silhouettes and unapologetic femininity.

For its SS20 presentation, the brand took over a light-filled space in Morningside, transforming it into a verdant garden (with the help of Blush flowers) — complete with a grass-laid runway, clothes hanging from lines above our heads and an overflowing fruit and flower market.

Opening the runway, Hewitt prefaced her collection with a poignant speech about her journey, why sustainability was so crucial to her design ideology and how, moving forward, she hopes that we as consumers can recognise the huge capacity for change we carry with our buying power.

The collection itself was distinctly Maggie Marilyn, where tones had been seemingly drawn from the beauty of nature, silhouettes hung effortlessly off the models and intricate, signature design details that often materialise in Maggie’s collections were present in new, seasonal fabrics. But there was a definite edge to this collection too. Full-bodied dresses, darker tonal moments and embroidered bodices were sent down the runway, which closed on a line-up of refined black dresses — an elegant conclusion and a sombre reminder of the seriousness behind fashion’s often-frivolous face.

Yu Mei
Taking over a sunny corner spot in Britomart, leather goods label Yu Mei treated us to a breakfast preview of its new collection and campaign, ‘Marmont’. Plinths displayed Yu Mei’s upcoming Autumn 2020 collection in vibrant shades of green, earthy browns and textural leathers, where signature styles had been given aesthetic upgrades to look at home alongside a raft of intriguing new silhouettes.

Jessie Wong, founder and designer of Yu Mei — a brand that was started and is still based in Wellington — spoke briefly on her journey from launching with handbags that she hand-stitched herself, to recently opening the doors to her first, flagship retail store. She also touched on the idea of sustainability residing at the heart of Yu Mei since its inception. Wong’s longstanding relationships with her suppliers (sourcing all the deer leather from a tannery in New Zealand) and desire to create a lasting brand has led to a focus on supply chain transparency, which has now evolved to her offering a unique buy-back scheme (customers can return preloved bags for credit) designed to promote a circular economy mindset.

Marmont, the collection we were gathered to see, had been shot at the Chateau Marmont in Los Angeles, and in my opinion, marked a significant step forward for the label. Shifting from the simple styles Yu Mei launched with, it felt like a move to embrace more sophisticated structures and bold design choices, and despite not being available until next year, was an exciting indication of where this brand will be heading in the coming seasons.

Benjamin Alexander
You might know him as the winner of the first season of Project Runway New Zealand, but Benjamin Alexander proved his fashion chops this week with his debut collection.
Joining the ranks of other young designers who are putting provenance as a priority when it comes to the core values of their brands, Benjamin Alexander is establishing his label as one that will be synonymous with luxury as much as it is with ethical responsibility, and is, once again, proving that sustainable fashion doesn’t require any kind of compromise around style or finesse.

Sending models down the runway in pieces that combined whimsical, prairie-style silhouettes with subversive, almost punk-like detailing (think pretty, frill-lined shirting with bare legs, chunky boots and berets over wet-look hair), Alexander seemed to be creating his own style code — set to make his unique aesthetic known from the get-go — a bold move for a debut collection, but one that ultimately worked in his favour.

With the light from Quay Street streaming in and casting the models as canvases for its dappled patterning, there was an air of magic to this show. And whether it was the promise of potential, the sense that this could be another exciting designer to take New Zealand fashion to the world, or just an impressive start for a designer so young, this is one label I’ll be watching with interest.

Mina
Embodying the idea of minimalism in both it’s aesthetic and its sartorial philosophy, local label Mina collaborated with Orphans Kitchen to host a breakfast for its AW19 presentation. Putting the concept of slow fashion at the forefront, the brand had its models wandering languidly around tables, ferrying the trays of food (sprouted loaf with various tasty spreads and seasonal fruit platters) to us, hungry onlookers.

The clothes themselves were simple — reflections of the designer Natalie’s focus on encouraging a consciously curated wardrobe — and combined earthy, tonal hues, crisp whites, wearable silhouettes and moments of precise tailoring. Designed, I felt, for the woman who is careful with her wardrobe and who knows the importance of taking time to stop and think before she buys, Mina’s presentation offered a welcome reprieve from the busyness of the week that was, and its collection encouraged us to slow down and take stock.

Jeweller Grant Partridge on 45 years in the family business, his passion for the craft and the question of succession